The year is 2084. The location, Krakow in Poland. Your name is Daniel Lazarski, and you are an Observer, a mechanically bio-enhanced detective capable of hacking into the minds of suspects.

On a day like any other while looking for your next case, your communications are suddenly interrupted by your long lost son, Adam. He seems distant and remorseful, this unexpected appearance can mean only one thing, he is in trouble. The contact came from a nearby block of flats and that’s where your search begins.

Observer is a first person adventure game, with one of the most striking visual designs I have seen in video games to date. Taking cues from a litany of inspirations, film noir, George Orwell’s 1984 (the year that the game takes place is 2084) and most notably Blade Runner, even going as far as to borrow from the principal cast, Rutger Hauer stars as Roy Batty in Blade Runner and here he voices the protagonist Daniel Lazarski. Before the game kicks off you are introduced to the world through a text crawl, a digital plague called the ‘Nanophage’ has killed thousands of augmented civilians, then a war known as ‘The Great Decimation’ occurs in the aftermath, a corporate entity called ‘CHIRON’ exploits the two tragedies creating a corrupt empire which enforces austerity on the citizens while lining the pockets of the super-rich. 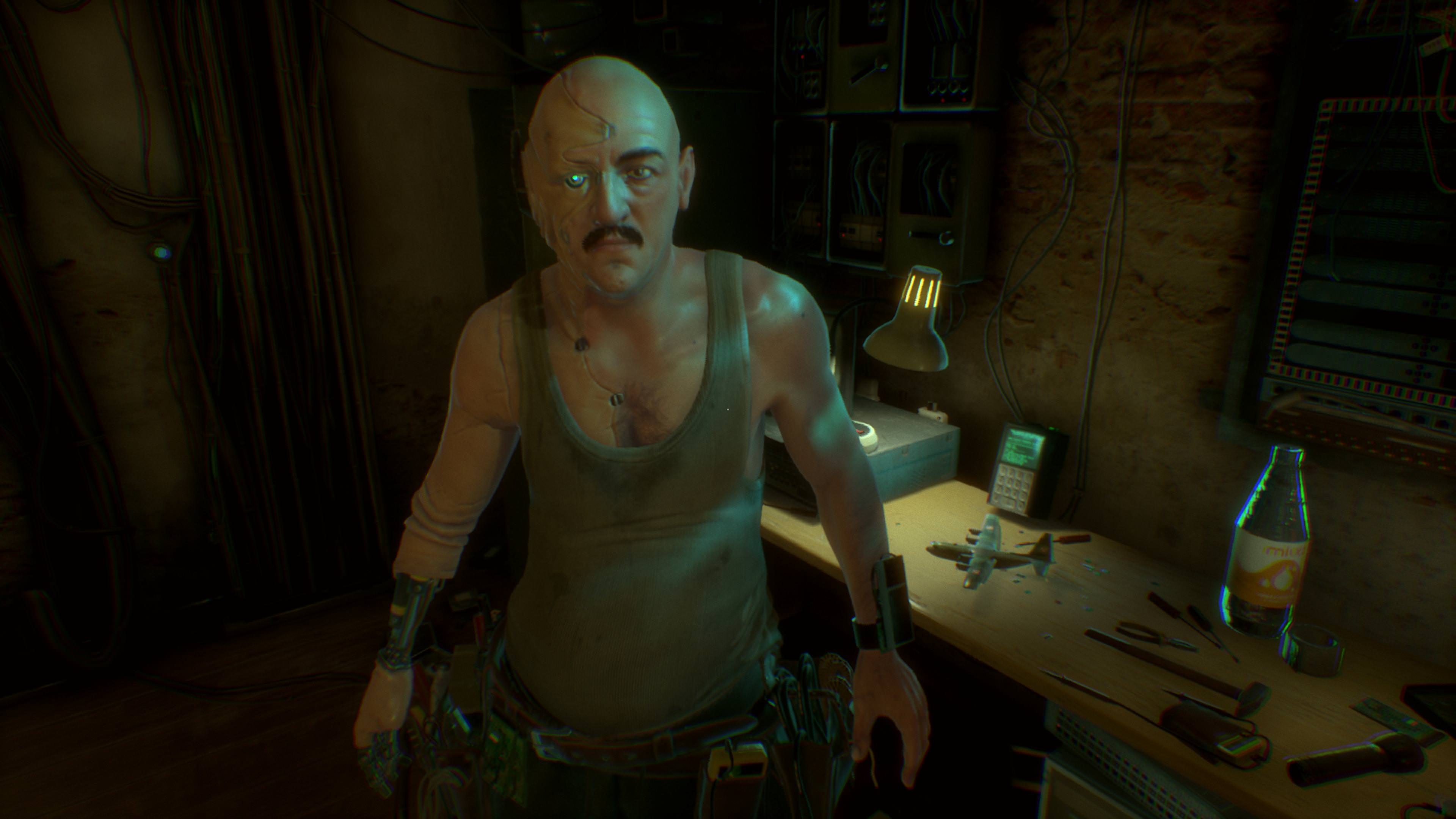 Arriving at the apartment complex you are first greeted by a rudimentary robot, a sort of walking vacuum cleaner. We may be in the near future, but you get a sense that things in this area are deprived and dilapidated, and there’s no better example of this than the caretaker of the building, Janus. Janus looks somewhat worse for wear, sporting a stained vest, tool-belt and haggard expression, his appearance mirrors the building with its exposed wiring and plumbing, he himself showing signs of disrepair. The right side of his body looks synthetic, fake skin shiny in appearance is attached haphazardly to his real skin, much like cloth pinned to a tailor’s dummy, the skin-like material on his right arm is bunched up at the wrist revealing part of his mechanical nature, his robotic eye bleeds neon blue light and the black plastic cone on the side of his head sits in place of an ear.

After a strained conversation with Janus, he passes on some information to further your search. Upon entering the courtyard of the complex, you can’t help but notice a veneer of holographic imagery covering all aspects of the building even the floor beneath your feet. It’s hard to tell if this is a side effect of your computer enhancements or something that exists in the world for all to see (the holograms don’t really serve any purpose and seem to be just visual flair). The game’s visuals far surpass what you usually expect from an indie developer, not just from a technical standpoint but in terms of variation, your typical gritty film-noir backdrop is there to explore, along with advertisements for air purifiers, sports cars and body enhancements. Having the ability to enter people’s minds takes you to more cerebral locales like a corporate office nightmare and UFO patrolled fields of electrical wiring. The game never gets bogged down because there’s so much to experience and despite the horror of what you see, your morbid curiosity propels you forward.

The story that Observer weaves is sprawling and bizarre, doing a good job of showing rather than telling, only occasionally relying on more traditional means of story progression, you’ll find emails on computers and the odd audio log will crop up here and there but are few and far between. You can talk to the tenants of the building (if they trust you) to try and piece together what is happening, here you can listen to the gossip of the comings and goings of their neighbours. The tenants don’t invite you in for a cup of tea instead communicating through an audio/visual intercom, the small screen on the outside of the door displays corrupted static images of the occupants in various extreme close ups, focusing on parts of the face rather than the whole picture, leaving your imagination to fill in the blanks of what the tenants might look like. Rarely do you come across anyone that’s not strange or hostile, the conversations can often be humorous however and you do get some choice in how you respond. Some of the themes that the game explores are interesting, flirting with consumerism, voyeurism and mass surveillance to name a few also exploring the pursuit of the ‘ideal’ self and the extremes that one might go to to achieve it in an age where there are no limitations to what you can change in the body and mind.

Gameplay wise you can interact with various objects, hack keypads, use computers and generally nose around people’s belongings. You have additional ways to view the world through your augmented vision, one gives you a biological overlay, showing you blood, hair, physical injuries etc, the other giving you the ability to inspect technological or mechanical data, wiring, computer components, and even bodily enhancements. Scanning Janus for example gives you his height, weight, blood type and some of his body modifications and their level of maintenance, his synthetic spine is shown to be leaking lubricant…eurgh.

As I mentioned earlier, you interrogate people by hacking into their minds, this interprets their thoughts and memories by manifesting areas for you to explore in surreal and often horrifying ways. This offers some of the most interesting parts of the game (as you might expect) and through these interrogations you learn more about the whereabouts of your son. The game is a decent length and satisfying overall, however there are a few problems. There are a number of stealth sections where you need to progress through levels without being caught, failure to do so results in a game over and having to do the section again, the stealth feels tacked on and worst of all they make you do it multiple times, it wears thin quickly. The other problem I had was with the performance of the game, I played the PlayStation 4 Pro version and the game is plagued with slow down, frame rate drops to a crawl constantly and at one point the game crashed, another bug had the field of view zoomed in to a point that I could hardly see the environment, thankfully resetting the game fixed that particular issue. It really drags down an otherwise great game, it doesn’t help that the slow down seems linked to the various visual effects in the game and the more you progress in the story the more visual effects you’ll encounter so it does get progressively worse.

Do not let that put you off though, I genuinely think the game will show you things you won’t see anywhere else and the level of creativity used to build an unsettling world is some of the best in the industry. If you’re a fan of the horror genre, you’ll be surprised by the melding of horror aesthetics that don’t often meet in creating something new and fresh. Go play it.